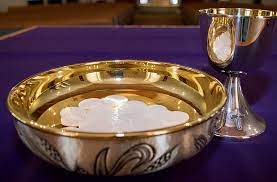 The Church of England House of Bishops has recently indicated that there will be no change in the Church of England’s position that we must share the ‘common cup’, share the chalice, even if this means that most congregations will be receiving Communion in one kind only for the foreseeable future. I’m in two minds about this: part of me thinks we should just get over the tradition and do what is best for the times we’re in: part of me cherishes the communal aspect of the ‘one cup’.

But most of all I wonder why the same argument isn’t applied to the bread? Why are those horrid little pill-like wafers even allowed? We returned to their use during covid, because the perception was that they would be handled less than the usual concelebration host which needs to be broken into pieces. I love the jagged, broken edges of a broken host; the idea that your bit was joined to everyone else’s; that we have all, priest and people alike, eaten of ‘one bread’. It’s the broken edges of the bread which persuade me that we should stick to the shared cup too

It seems contrary to insist on the one cup, but not on the one bread. Time for a rethink, or at least an explanation.