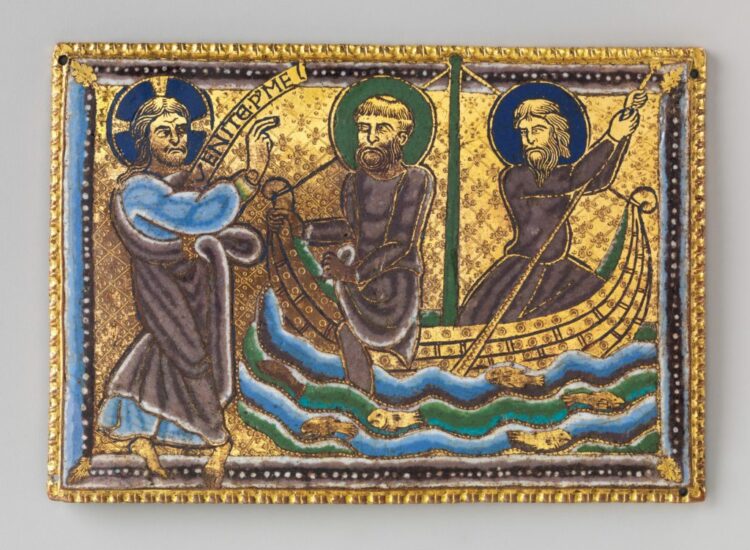 Today’s Gospel reading is, on the surface, rather uninspiring, and also rather odd. Why would Simon and Andrew simply walk away from their nets and follow someone they seem (according to Mark’s Gospel) never to have heard of? If you do a bit of digging though, the Gospel passage is full of action and drama.

Immediately before the section of the Gospel we read today, Mark has been telling of Jesus’ temptation in the wilderness; Jesus’ struggle of conscience with Satan – a graphic and spectacular spiritual wrestling match which sets the direction of Jesus’ public ministry.

Immediately following today’s passage it there is the account of Jesus teaching in the synagogue at Capernaum, and the healing of a man with an unclean spirit.: people are astonished – they’ve never heard anything like it. Immediately after that there is the first healing miracle: Jesus heals someone who has been very sick – someone who seems to speak with the voice of demons. And after this first healing, Jesus’ ministry of teaching and healing continues at breakneck speed with crowds seeking him out hoping for miracles.

Between these two action packed passages, in today’s Gospel we hear that John the Baptist has just been imprisoned by Herod. Herod is living a debauched life in his palace, his own lust making him easy prey for his wife who seems to be a very nasty character indeed. John the Baptist loses his life at the whim of this powerful Roman elite, his life snuffed out at the hands of a ruler who is completely unaccountable to his subjects.

The struggle between good and evil, and questions about Jesus’ identity

So we have Satan in the desert, Herod in his palace and a man speaking  with demonic voices. And then, in the midst of all this turmoil, the calling of the first disciples. Mark purposefully sets the story of those called to become ‘fishers of people’ in the context of a tumultuous struggle between good and evil, the forces of darkness and the Kingdom of God.

The account is also framed by questions about who Jesus is: the preceding temptation story sets Jesus’ self identification, and the subsequent account of Jesus preaching in the synagogue is the beginning of the debates amongst those around Jesus about who he is.

In all this drama, Mark portrays Jesus as someone resisting evil, making a stand for good, calling people to repent, and proclaiming that God’s Kingdom is drawing near. The mention of John the Baptist, Jesus seeming almost to replace him, also marks out Jesus’ ministry as one that stands against the social and political evils of his time

The Nature of Jesus’ Call

Put into this context, Jesus’ calling of the first disciples really isn’t about calling them to become religious evangelists; rather it is about a calling to a spiritual life which stands against evil and struggles for God’s Kingdom to draw near. Jesus’ kingdom is one which dawns in the lives of struggling people, caught up in a harsh political regime, dealing daily with poverty, and with no way of escaping the heavy load laid upon them. The fishermen in today’s story would, themselves, have felt the weight of this oppression – the fishing system was financially crippling to those who actually did the hard work. The Kingdom of which Jesus speaks, and his call for the first disciples to follow him aren’t things of personal piety, cut off from the world around. Rather he is calling them to the struggle between good and evil, light and darkness.

So this is a spiritual calling, but it really isn’t the religious calling which we so often hear of when these words are read. This was nothing to do with persuading people to come to church – apart from anything, the church didn’t exist then. In many ways it was the opposite; it was about giving people outside the religious system, or on its fringes, knowledge of God’s love and  forgiveness. It was taking God out of religious systems and putting God out there on the streets.

Thinking about what this means for us is challenging. To begin with I think we have to return to what I mentioned at the beginning, which was that, in Mark’s Gospel the first disciples appear to follow Jesus never having seen him before. In doing so, Mark is portraying Jesus as a very compelling person – the disciples must have been able to see something in him that drew them to him very strongly. It is different for us, most of us having grown up with Jesus, so to speak. We may never have had the occasion to stop and think about why it is that we are his followers. It can be almost as if we’ve simply followed the person before us in an orderly queue, stretching back 2000 years.

So, as we consider what it was that those first four disciples saw in Jesus, we might stop to consider what it is about Jesus that makes us want to keep on following all these years later. Not just receiving the benefits of his Passion, but being disciples – followers on The Way. For me, Jesus shows me the way to live – a way which treats with dignity and care those who are not powerful or wealthy. To me, Jesus was a true lover of people. It’s sometimes impossibly hard to follow in his way, especially when that love is reciprocated with malice – but that is what seems to be required.

Secondly, following Jesus, undoubtedly leads us into this struggle between good and evil; the forces of darkness and the forces of light. How this is done is important. If we stop to think, Jesus wasn’t a moralist in the manner of so many churches today. The people on the streets, and on the edges of society, amongst whom he taught God’s love and healed the sick, were probably quite a rum and improper lot. He called everyone to repent and receive forgiveness, but when he pointed the finger and spoke in condemnation it was generally at people who oppressed others, those who trampled others underfoot: Jesus had a lot to say about what we now call institutional sin – unjust power structures, built to benefit a wealthy and powerful elite. This is still very familiar today.

So, yes, we need to be part of the struggle for goodness and righteousness, but this isn’t very much to do with the moralistic crusades which still mark the life of the church – the Church of England included. It has been  interesting to see how many of the groups assembled outside the COP26 summit in Glasgow have been faith groups – many Christians amongst them. They are following Jesus just in a very similar way to that described by Mark when he talks about those first four  who left their nets on the shore and followed Jesus on The Way.