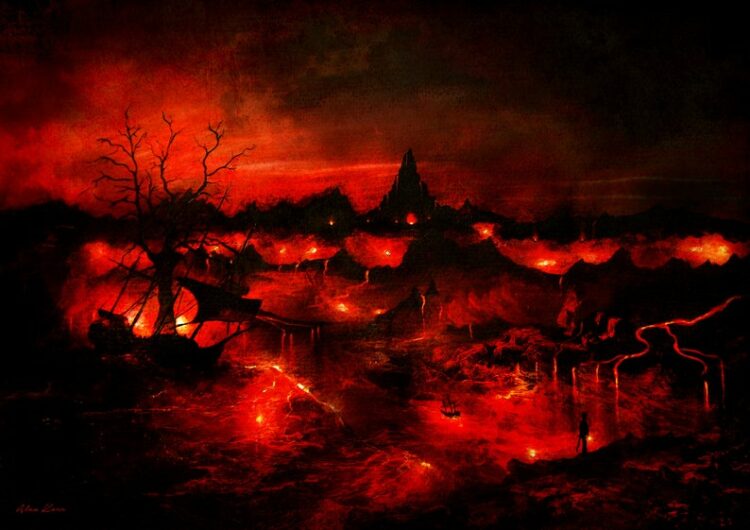 Sermon for 2 before Advent 2021
Year B
Apocalypse
Keeping the faith – contemplative and active.

The anture of apocalyptic writing

‘The end of the world is nigh’: you can almost see the man with the sandwich boards, walking silently up and down, maybe in the bus station or in the marketplace. The idea behind such predictions is an old one and we have two examples of it in our readings for today – from the book of Daniel and from Mark’s Gospel. Such writing is known as ‘apocalyptic’, and , ancient though this type of thinking is, it still has contemporary appeal. I’m not a lover of scary films, but even I’ve heard of Apocalypse Now: I’m sure there are others. And even without the help of film makers, we catch glimpses of terrible events and call them apocalyptic: terrible floods and fires, earthquakes, and, of course, human violence and war.

In fact the word ‘apocalypse’ simply means ‘revelation’. The very last book of the New Testament is known both as ‘Revelation’ and ‘The Apocalypse’ – another book about the end of the world. In the past, such revelation was the territory of prophets and seers or visionaries. So, if you look at the beginning of the reading from Daniel, you will see that God spoke to Daniel in a vision. The apocalyptic passage from Mark’s gospel is a little different – the words come from Jesus’ mouth in the midst of a conversation with the disciples. But, although there is no ‘vision’ as such, the idea is still the same: this is special knowledge, beyond the reach of most people.

In the early years of the church the idea of the apocalypse changed to become a much less negative event. Suffering and catastrophe still featured heavily, but began to be seen as a precursor to the return of Jesus – the Second Coming – the coming of God’s heavenly kingdom of peace. This is still part of Christian belief today: the Nicene Creed, ‘He will come again in glory to judge the living and the dead, and his kingdom will have no end.’ The Second Coming of Jesus the prophet is also an important belief in Islam – something we share, then, with our Muslim neighbours in Blackburn. Traditional Isalmic teaching is that Jesus will descend at the point of a white arcade, east of Damascus, dressed in saffron robes — his head anointed, and will slay the antichrist, and the people of the book (Jews, Christians and Muslims) will be united.

There are still numbers of people who claim the special, esoteric knowledge needed to predict the exact time of the end of the world and the Second Coming of Christ, and history is littered with the stories of prophets who have predicted the Second Coming at 2 o’clock on Tuesday afternoon. And of course 2 o’clock on Tuesday afternoon passes by and nothing happens. These precise predictions are misguided and unhelpful because no-one has this information: Matthew’s Gospel tells of Jesus specifically saying that ‘no-one knows on which day or at which hour he will return: even he doesn’t know – only God the Father.

So, specific predictions of date and time have no place in Christianity. But the general predictions are another matter. Here, apocalyptic predictions follow the same pattern as properly understood prophecy: both read the signs of the times and predict the inevitable outcome. This grounding in current reality is really important: true prophecy isn’t the same as soothsaying – it’s much more to do with the sort of formula which says ‘if you keep on doing x, then y will happen’. At its simplest this could be something like ‘if you keep on sucking boiled sweets you’ll lose all your teeth’. But, of course, prophecy, and specifically apocalyptic prophecy, can be very serious indeed, and that is what we are now facing with regard to climate change.

I think todays’ seers are the scientists who use their knowledge to predict what a 2.5% rise in temperature will do to the world we live in. Today’s  prophets are the many people, young and old (Greta Thunberg to David Attenburgh) who shout out about the need to change, and the consequences of failure to take action. Many of these are secular prophets – religion is no longer the sole owner of prophecy. Climate activists rightly point out that climate change will be apocalyptic and it will affect us all.

There are those, particularly members of American fundamentalist religion, who consciously encourage conflict in order to hasten the Second Coming. If you look at today’s Gospel, you will see, at the end, that wars, earthquakes and famines, are ‘the birth pangs’ – they are the world going into labour, before bringing the Kingdom of Heaven to birth. So confident are these people of their place in heaven that they have become active in encouraging the wars and violence that they believe will herald its coming. Unfortunately this is all tied up with beliefs about Jerusalem and Israel; these beliefs feed the war and violence in the Middle East.

This is clearly bizarre and inappropriate belief and behaviour for people of faith, particularly as Jesus called his followers to be people of peace. It does highlight something very important though, and that is that Chrisitans are called to keep faith, in the midst of all this trouble. Beware that no one leads you astray. Many will come in my name and say, ‘I am he!’ and they will lead many astray. In the midst of all the troubles of the world, we must be faithful – we must hold on to our faith. I don’t believe that this is entirely a passive thing; yes, we must pray, reflect, treasure moments of stillness and times when God feels very near. But Christianity has always been an active faith; so, for instance, we are called to feed hungry folk, and so we give food to the food bank.

For us then, who believe that the world around us is of God’s making, a beautiful gift, shot through with God’s glory, keeping the faith, staying faithful, means doing whatever we can to prevent further damage. We can do this in many ways – as I mentioned last week, faith groups were a large contingent in the groups of protesters at Cop26. We can’t all do that, but we can all do something. We can be careful about what we buy, or how much we buy, how much we throw away, and how we throw it away – recycling as much as we can. And we can do our best to make sure that the things we buy don’t exploit and harm others by choosing fairly traded goods. All these things are part of keeping the faith, even when we feel tempted to give up, or feel that there’s nothing we can do – it’s out of our hands, too big for us.

Today’s Gospel begins with the stones of the Temple – the disciples wonder at their size. I’ve been there, and stones are indeed enormous – so much so you wonder how on earth people without cranes and huge trucks could possibly have built it. Today the Temple is a ruin, although parts of its walls are still standing. The fall of the Temple in 70 a.d. was a catastrophic event for the people of Jerusalem, both Jews and Christians – it must have felt  like the end of the world. There was terrible suffering and violence. Even amidst such catastrophe people held their faith – they never gave up, and we stand on their shoulders.