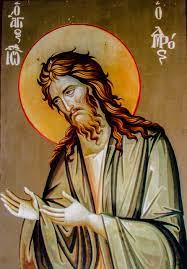 Sermon for Advent 3
2021 Year C
John the Baptist
A man who kept his ego in check
A man who pointed away from himself.
Authenticity.

John the Baptist is a compelling figure. He has been portrayed since the earliest days as a wild and unkempt man with a shaggy beard and tangled hair. He was very outspoken to the point of rudeness – it’s quite something to call people a brood of vipers! His outspokenness brought about his untimely death – he denounced Herod in public for marrying his brother’s wife, setting into motion a chain of events which lead to his imprisonment and his brutal execution.

The unkemptness, wildness, outspokenness and rudeness make him sound very far from the sort of person you’d want to spend time with, and yet thousands flocked to hear him speaking. And the places they flocked to were inhospitable places – out in the open with no shelter from the sun or the heat. Even Herod was fascinated by him, despite the public denunciation.

John the Baptist has continued to call our attention over almost 2000 years since his death. He is often remembered in  the church’s calendar – more so than almost anyone else apart from Jesus himself: he has two official feast days to mark his birth and his death in June and then in August. And he looms large in Advent – the third Sunday of Advent is especially devoted to him, but he is alluded to on the second Sunday of Advent too: the day remembers the prophets of the Old Testament, and John is seen as the last of them – the full stop, or perhaps the exclamation mark, at the end of thor lineage. Even St Paul doesn’t have this many feasts. In the Roman Cathollci and traditions, only the feasts of Mary outnumber those of John.

What do we know about John?

And yet we really know very little about him. St Luke sets out the story of his birth, a story that is woven around the narratives of Jesus’ nativity. The Benedictus, the song of John’s father Zacharaiah, tells of John’s role as the prophet who will announce the coming of the Messiah. We have fragments of John’s preaching, like those in today’s Gospel, and we have the account of him baptising Jesus in the Jordan and his revelation that this is God’s son. And of course, the beginning of John’s Gospel speaks of John as the one who was sent to testify the light, but was not, himself, the light.

We can’t know for certain what it was about John that made him so compelling, but I have a feeling that this speaking out whilst at the same time pointing away from himself is an important part of the answer. He was very clear that this wasn’t all about him – he was there to draw attention to someone else. Indeed, he seemed very careless of self – hence the hard life in the desert and the unkempt appearance. I always think it ironic that, on this particular Sunday in Advent, we light a pink Candle as a sign of a refreshment Sunday when we can pause and take a breath, and speak of John the Baptist who was one of the most un-pink people you can imagine. Some get confused and think pink must be for Mary – but she’s next week, and she wasn’t very pink either.

Charismatic preachers and leaders can be dangerous people when they let their egos get in the way – it’s a common pitfall. I think it’s why many of us are so suspicious of the so-called ‘Televangelists’ so prevalent in the US. There are others who imitate them in their almost rock-star status, leaders of big or popular churches, taking the stage, microphone in hand with undoubted gifts of oratory and skills in communication. It’s very easy to land up being the centre of attention. One of the disciplines of a good preacher or priest is to get out of the way, so people can see God.

John must have been such a person; the information we have about him is sketchy, but whenever he crops up he is always pointing to Jesus, and telling people to get ready to meet him – ‘the one who is coming after me, the one whose sandals I am not worthy to untie’, the one who comes to testify to the light but who isn’t, himself, the light. This is no stage- strutting preaching star – John has paid his ego aside: he is utterly authentic.

John told people to repent. Again, this isn’t an easy message to hear, and yet people flocked to him and were baptised in large numbers – they were repenting of their sins. We can see in today’s gospel that he is addressing this message to ordinary people in general – he was challenging to share what they had with others. And he spoke specifically to tax collectors and soldiers: people in these roles had enough power to prey on others for their own gain. Again, people took this from John, and, again, I think must have been because of his authenticity and honesty – no one seems to be calling him a hypocrite, as we are wont to do when people take the moral high ground.

What can we learn from John?

So, we have much to learn from John and much to emulate. Here was a man who was completely devoted to his calling, someone who mastered his ego and declined to call attention to himself. When he received attention he always pointed away from himself – ‘don’t look at me – look for God!’ He was a man without pretension – a holy man of God, he was very far from ‘holier than thou’ or self-righteous. He stood by what he believed, even when it was dangerous. His message was challenging, but he said what he had to say openly and honestly. We have few of his worlds, but his influence lives on. The power of his personality echoes down the generations: if we listen, we can still hear his advent cry: repent, for the Kingdom of heaven is close at hand’.

2 thoughts on “A Sermon for the Third Sunday of Advent”