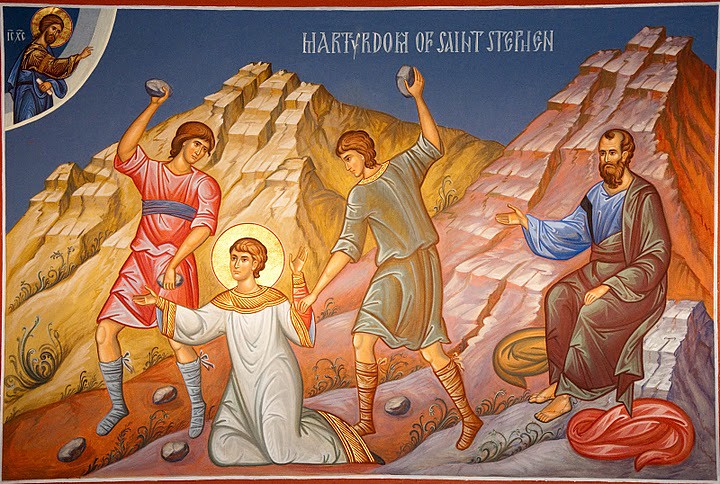 Today is the feast day of St Stephen. We don’t get to celebrate this very often, and even this year the feast has been transferred to tomorrow so we don’t have to think about Stephen. But we’ve taken the opportunity to sing Good King Wenceslas: the carol tells the story of a Bohemian KIng going on a journey and braving harsh winter weather to give alms to a poor peasant on the Feast of Stephen. During the journey, his Page is about to give up the struggle against the cold weather, but is enabled to continue by following the king’s footprints, step for step, through the deep snow. The legend is based on the life of the historical Saint Wenceslaus 1, Duke of Bohemia (907–935).

The trouble with Stephen is that he was a martyr – the very first Christian Martyr, in fact. It’s very difficult to celebrate martyrdom on the day after Christmas: it’s hard to hold the two together. The feast of the Holy Innocents which falls on Tuesday (28th) is even worse – the remembrance of a massacre. Wenceslas was a Martyr too, I discovered.

All this bloodshed in the middle of Christmas, leaving a red stain on white snow, so to speak. Our inability to deal with this at Christmastime is a demonstration of our misunderstanding of Christmas. God came to be with us – that’s what Christmas is all about. Being with us includes encountering hardship, sadness, and, as Jesus shows us, bloodshed and violence. Many people find Christmas impossibly hard because we have made it into a feast of jollity and, to a large extent, perfection. People whose lives haven’t turned out the way they’d hoped, people who have suffered bereavement or illness or great sadness, can find Christmas tough. This year many families will be having a poor Christmas – dinner from the foodbank and only very small presents for the children. Here’s another stain on the snow – the stain of tears.

St Stephen reminds us that, at Christmastime, Jesus is with us in joy and in sorrow. In an off way, he brings great hope too. Stephen was stoned to death because some people didn’t like the Christian message he was preaching. St Paul was a witness to the stoning – I can’t help thinking that his conversion began that day. As Stephen was dying, he had a vision, in which he saw Jesus standing at God’s right hand. Now as we know, the standard phrase is ‘sitting’ at God’s right hand. Might it be that Jesus is standing, as seems to be shown in the two pictures, getting ready to welcome Stephen into heaven – welcoming him home. See that hand, in the upper picture, (a beautiful contemporary icon my Maxim Sheshukov) reaching out, almost as if to give Stephen a hand up. And, in the lower picture, Jesus, standing – he’s definitely noticed what is happening and is up on his feet, alert, and waiting.

I like to think that, in the hard times in our lives, Jesus is up on his feet, standing and taking notice, waiting to give us a hand up. The risen, ascended Jesus, portrayed here, is very familiar with hardship and suffering. He’s rooting for us – and now and in the future, reaching out his hand to welcome us home – for we can be home with Jesus, even in this life, even in the midst of suffering.