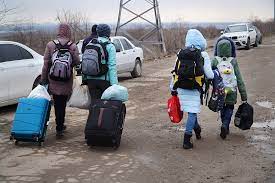 Sermon for the Comemmoration of the Lords’ Supper
2022
A meal on the edge of life. Uncertainty, fear, betrayal, leaving in a rush. Thinking of people in Ukraine, and elsewhere, who must leave their homes and take to the road.

Jesus’ last supper was a meal hovering on the threshold of things. We tend to think of it as settled, easy, and relaxed – a big Jewish meal with friends at the heart of the Passover celebrations in Jerusalem. Whether this was a Seder Celebration is now a matter of debate, but what we do know is that the Last Supper took place at the time when the whole of Jerusalem was in Passover fever – just has Christmas dominates everything from the middle of December onwards. The gospel accounts of the Last Supper have strong resonances with a Passover meal – words from the rituals, the manner of being seated at the table, the common cup, and so on.

So, I think we can be certain that the collective memories of the Passover meal were at the heart of the Last Supper, one way or another. Here were  memories of the lambs’ blood, daubed on doorposts which spared the people of Israel from the tenth, terrible plague of the death of the firstborn. And memories of the bread – packed in a hurry, before it had risen, the kneading bowls wrapped up in people’s cloaks and carried on their shoulders as they rushed to leave – the journey out of slavery – and into the desert. What a terrifying night that must have been.

We are so familiar with the story of the Last Supper that we tend to think that Jesus had it all planned out in his head. I think it wasn’t like this: Jesus knew he was in terrible danger, knew that he would be very lucky to get out of this alive, had noticed that Judas was talking to dangerous people, sensed that his ministry and teaching were only ever going to lead him to one place. But I don’t think it was like being in a play, with a script and everything set out beforehand – Act 1, scene 1 through to Act 3 scene 7, so to speak.

And, just as the people of Israel had to leave, suddenly, without time for the bread to rise, so events overtook Jesus. In both cases there was an idea of what was to come, but both were experiences of being overtaken by events: people caught up in the chaos of life.

Here are great resonances of life for millions of people in the world today: hurried meals before taking to the road, grabbing a loaf before locking the door and leaving, not knowing if, or when, there will be a return. And the danger: like Jesus, people face terrible danger. Will they make it, or die on the road, or at the railway station? The Last Supper inhabits the space on the edge of life, a space where existence is fragile, insubstantial and uncertain. The Last Supper is the place where friends waver or become enemies, where all that is solid and trustworthy becomes insubstantial and fickle. Where certainty becomes doubt.

And here, once again, Jesus plumbs the depth of human experience. Here, he know the dread of what may come, the fear of  approaching disaster, inevitable but hazy,  the intuition that  beloved friends may no longer be trustworthy, the realisation that humans are going to inflict terrible cruelty on one another.

And yet here is our salvation: here is the meal, passed on in our own collective memory, which brings us hope, and peace and the knowledge of God’s love. Here, at the edge of life, at the moment of uncertainty and terror, is the meal of our redemption. This was another moment of choice for Jesus, and he chose to stay with us, to walk the way of suffering with humanity, not to save himself, not to flee. And, later in the garden, Jesus’ prayer is not answered: God will not save him – the cup of suffering will not be taken away; suffering and death will enter the very heart of the infinitely creative and life-giving three-way relationship of Father, Spirit and Son.

Two millennia of Christianity have taken away that frizon of fear and excitement which seem still to be present in the Jewish Passover meal. We have made it a place of certainty, safety, routine. But here, tonight,  we are challenged to be with Jesus on the edge of life, at the tipping point between friendship and betrayal, in the place of fear. And, when we receive the bread and wine, we carry in our hearts all who are on the road tonight, fleeing from war and terror, in danger on the road, leaving with only the most precious things, and closing the door on homes, and safety and certainity. Amen