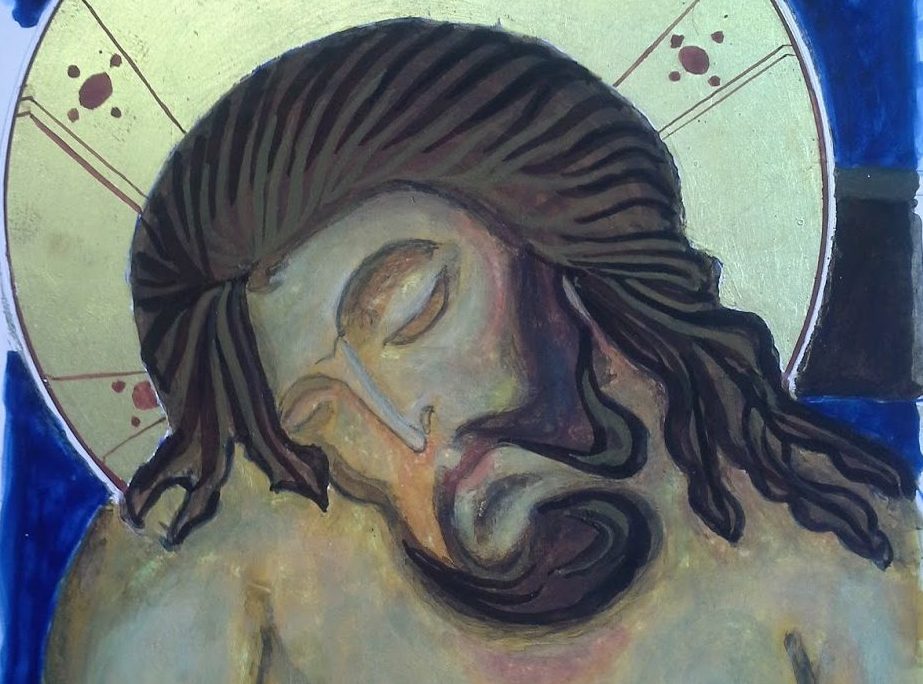 This is my sermon for Year a Proper 21. The image is from an icon I painted entitled ‘Extreme Humiity’.  I think the issue of our use of power is centrally important in toChristian faith, and something we should talk about more both locally and nationally – and of course, internationally.

Some time ago I, along with all my fellow clergy, was required to go on a ‘Bishop’s teaching Day. I confess I always dread these occasions – they’re busy and noisy and everyone talks at once.

The worst bit comes when the speaker invites questions from the floor, after which those who stand to speak seem to be trying to prove how clever they are either by asking immensely complicated questions or by trying to catch the speaker out. So after an hour during which we had heard about such wonders as the Metanarrative and Dietrich Bonhoeffer’s theology of the Penultimate and the Ultimate, one clergyman stood up and told us all without so much of a hint of humility, that the local Imam had told his followers that if they wanted an example of a godly man they need look no further than him – the Vicar who was speaking.

I think we must all have been either stunned or asleep as no-one batted an eyelid. Beware the sin of pride. Jesus spent a lot of time talking about it. To me it is self evident that if someone thinks they’re a prime example of a godly man, they’re not.

And tripping Jesus up was what these Pharisees were trying to do in today’s gospel. They were trying to be clever, and found out that Jesus was even cleverer – they became trapped in their own argument. It was definitely 1 – 0 to Jesus.

But winning the argument was not really what it was about. Jesus could beat them at their own game, but it wasn’t a game that really interested him. The topic interested him though – the topic of power and responsibility.
If you think about it, Jesus wasn’t against power. After all he wielded a lot of power himself in some ways – the power to heal the sick, drive out demons, rise from the dead – these are things which use more power than any of us have. As Christians, believing that Jesus was God’s Son, part of God himself, we have to recognise that he was in inherently an extremely powerful person.

When Jesus did use his power it was in the service of those who had no power – very sick people, people who no-one wanted to associate with, and children.

There is an old saying that power corrupts and absolute power corrupts absolutely. We see this around us in the church and in the world. The church talks about mission, but excludes people in a blatant and unchristian way. Even now, when at last we have women Bishops, it is still quite legal for a parish, when seeking a new Vicar, to state that it doesn’t want a woman? This would be illegal in a secular institution where, in theory at least, jobs are open to anyone with suitable experience and skills. As far as I’m concerned this is not about theology – what we believe about God, or ecclesiology – what we believe about the church. It is about power – who’s in and who’s out. And parishes like our are ‘out of favour’ in very many ways too – simply because we’re not wealthy. There are many parishes across England where, to live there, you have to be a millionaire, but where the parish share is much less than ours – in a parish where a ⅓ of the children live in poverty. We have to thank God for Bishop Philip who is raising this issue nationally.

Although in some ways the world is ahead of us, we see there as well the wielding of power in ways which we cannot reconcile with the Christian Gospel. President Trump claims christian beliefs but uses his power to protect his own powerful country and its interests, precluding anything to improve the lot of the world’s poor. How can he justify this as a follower of Jesus? I think, even our own Prime Minister – the daughter of a clergyman – has little idea about inequality and is busy playing power games which she really ought to distance herself from.

For Christians, power has to have a purpose and that purpose is to empower those who have no power. This can be done in many ways – education, the protection of the vulnerable, the enrichment of lives through art and music, making accessible that which is inaccessible, healing. At the very least Christians should not use their power to work against any of these things.

Very often we feel powerless, and we are probably a great deal less powerful than most. But we all have power, in one way or another, simply because we’re alive. How can we use our power as followers of Jesus? We can use our words to build up, not tear down. We can all consider others before ourselves. Even though we feel powerless, we can speak out about abuse of power when it affects us or others. We can look at our motives – when we do something are we trying to bolster our own egos or doing something from a genuine desire to help and make life better.

Whose kingdom are we building – our’s or God’s? In some ways I think people like ourselves have to be extra vigilant – when we have experienced powerlessness, suddenly having power can easily go to our heads and before we know it we’re tramping others underfoot in the same we we, ourselves have been downtrodden. We have to be vigilant and self-critical, which I believe are at the very heart of the Gospel:

Let me finish with those words from Philippians which we heard earlier:
Let the same mind be in you that was in Christ Jesus,
who, though he was in the form of God,
did not regard equality with God
as something to be exploited,
but emptied himself, taking the form of a slave,
being born in human likeness.
And being found in human form, he humbled himself
and became obedient to the point of death –
even death on a cross.
Therefore God also highly exalted him
and gave him the name that is above every name,
so that at the name of Jesus every knee should bend,
in heaven and on earth and under the earth,
and every tongue should confess that Jesus Christ is Lord,
to the glory of God the Father.
Therefore, my beloved, just as you have always obeyed me, not only in my presence, but much more now in my absence, work out your own salvation with fear and trembling; for it is God who is at work in you, enabling you both to will and to work for his good pleasure.