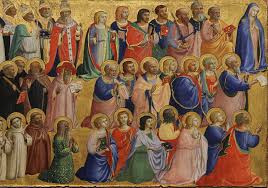 Sermon for All Saints Day 2021
Following Christ in every day life.

The audience was seated in the nave of a darkened church and the actor stood at the front under a spotlight – he was all that could be seen. It was an amazing experience: we don’t often hear the whole of a Gospel, just selected passages, Sunday by Sunday. The highlight was the story of the raising of Lazarus. Suddenly the performer shouted very loudly, Lazarus! Come out! Apart from making everyone jump, it was one of those moments when your perceptions did a complete U turn. Suddenly, I realised that we, memebrs of the audience. sitting in the darkened church, were actually Lazarus in the tomb. And Jesus was calling us – loudly – to leave death and darkness behind and to follow him – who is light.

I think that a plausible definition of a Saint is someone who has faithfully responded to the call of Christ, rather like Lazarus emerging from his tomb. Jesus used similar words ‘follow me’ to call others: the Gospels recount at least 10 occasions when Jesus called people to follow him.

Throughout the past 2000 years, those who have responded to this call have done so in many different ways. Some, like St Francis of Assisi were called to live in poverty, worldly goods having become a distraction. Some have dedicated their lives entirely to prayer. Some have been called to care for the poor and destitute or the dying; others to resist evil. Some have been called to keep their faith under persecution, and many have lost their lives rather than deny their faith. Some have been remarkable for their kindness, some were rather fierce characters. Some, like our Patron Oswald, were royalty, others were poor peasants.

We often think of saints as people with strong faith – no doubts – but many, many saints have wrestled with doubt, and with times when God has felt far away or even absent. Within most of our memories, Mother Teresa wrestled with doubt for nearly all her life. Hundreds of years before her, St John of the Cross wrote of the ‘dark night of the soul’.

Many saints had their most profound spiritual experiences in times of illness; the wonderful medieval English mystic, Mother Julian of Norwich, had her visions at a time when she was so ill she wasn’t expected to live.

I have spoken of saints largely in the past tense, but there are saints in every age, and there are many who have lived within living memory. Most of us will remember Mother Theresa of Calcutta. She wasn’t beyond criticism, mainly because she cared for poor and dying people without challenging the causes of their poverty. But God’s call to her call was to care, and in that she was faithful. She was officially made a Saint in 2016.

There are others who don’t have any official saintly status, but whose lives clearly point to sainthood. I think of the German Lutheran pastor, Dietrich Bonhoeffer, who was executed in a concentration camp for his part in a plot to assassinate Adolph Hitler. Again, this isn’t what would immediately spring to mind when we’re thinking about saints; he wrestled with this, but in the end he felt that this is what he had to do. He was also a very outspoken man, openly critical of the Nazi regime when the German church was mosly keeping quiet.

All of those I’ve mentioned, and thousands more besides, are people whose lives and examples can help us on our own faith journeys. We tend to think that we can’t be holy or saintly people because our lives aren’t right; we’re too busy, too troubled, not well enough, too old, not old enough. The saints show us how to be holy here and now, in the thick of life, even in the midst of death.

On this feast of All Saints we remember that the saints of the past keep company with us. They are here with us as we gather for worship, they join with us as we celebrate Holy Communion.  We are surrounded by a great crowd of witnesses, as the writer of the New Testament book of Hebrews puts it. They are our examples, but also our companions and our encouragers, as, we seek to answer Christ’s call to follow him.