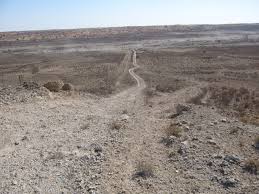 Sermon for the Second Sunday of Advent 2021
Year C
Finding God in the desert rather than the oasis.

Years ago I flew over the Sahara desert on my way to Cameroon. I gazed down on it from the window of the aeroplane for hours and hours – thousands and thousands of miles of barrenness and emptiness. Occasionally I caught sight of traces of green – places where there was enough moisture for some shrubs to grow, although never enough greenery, or any sight of water, to suggest an oasis. Then there’d be a road – noticeable, mainly because this was a straight line in a landscape of windblown curves and blurred edges. The roads went on for miles and miles, all ending in what looked like oil tanks – industrial complexes in the middle of nowhere. And then hours and hours of continued flight over the never ending sands.

Even today, deserts are empty places. Their scale is beyond my comprehension, although some people know their way through. They are places of intense heat and bitter cold, and, of course, places where there is almost no water. To us, these are distant places, but to the people of Israel and Palestine, then and now, the desert is close by, its scrubby barrenness encroaching on the edges of everyday life, the sand and the heat never far away. The wildernesses of the Middle East aren’t as vast as the Sahara, but they are hostile and largely uninhabited places, non the less

But there have always been people who have made the desert their home, and also people who travelled the desert roads carrying goods from far away to the markets of the cities and towns. In Jesus’ time there was a whole community of people living in the desert at a place called Qumran, a little way back from the north west shore of the Dead Sea. This was a sort of monastic community of people who lived in extreme austerity, keeping themselves free from the pagan culture of the Roman state, and seemingly taking a lot of baths – part of a ritual in which sin was washed away. This is reflected in the teaching of John the Baptist, and stays with us today in  the sacrament of Baptism.

In the days of the early church – the first few centuries after Jesus, many Christians returned to the desert to live solitary lives as hermits, or as loosely gathered groups of monks (and some nuns too). They chose the desert because it was a hard place to live – the physical hardships they endured were an expression of their faith – this we call asceticism. It was a kind of extreme discipline of the body in order that the soul could be free and unhindered – there was less to get in the way. Besides their commitment to physical hardship, I think this idea of escaping from distraction is important for us to remember about these people who lived out in the desert.

These days, if we talk about being ‘in the wilderness’ we’re talking about being lost, having lost our bearings somehow – losing our ability to navigate our way through life because of some catastrophic disruption – perhaps having lost a loved one, or having been made redundant, or the kids having left to go to University. At such times we become aware of what we have lost – the things that shape our days and give structure to our lives. In a way, the desert dwellers did this to themselves on purpose – they deliberately did away with the relationships of family and friends, their possessions, even the normal routines of eating and sleeping, so that their normal bearings were set aside: they reset their lives completely – their focus became entirely on God through their lives of prayer.

I think there is something we can learn from these desert dwellers of old. We tend to be people who seek God in tranquility: we might expect to encounter God in the oasis rather than the desert. In life’s barren places where everything is painful and hard, we tend to think all we can do is survive and hold on. But the desert dwellers of faith teach us that the desert is the place where our faith can develop and mature, perhaps better than anywhere else.

Many of us are facing very difficult things in our lives at the moment – we have more than our fair share of suffering amongst us here this morning. Life is very hard for many of us, and for our families and friends. We must take courage from today’s gospel reading. It is out in the desert that it all begins. It is in the desert that God appears – John the Baptist was seen as one who was making a highway, a long, straight, flat road  in the desert for God to travel on. The little phrase, ‘make his paths straight’ refers to indistinct pathways, barely visible worn marks on the ground made by people or even animals, who have trodden the ground and gone on their way. It can feel like this, in hard places; the way we tread seems directionless, random. But we are promised that the crooked paths will be made straight, the rough ways made smooth. By seeking God, out there in places of struggle and grief, you will find a road that takes you in the right direction, a road that takes you to home, a road that, when  you walk along it, you’ll suddenly recognise that the person walking alongside you is our friend and our Saviour, Jesus Christ.

So, if you find yourself in a bleak place while everyone else seems to be gearing up for a huge ‘jolly’ as Christmas approaches, remember that you are probably in a better place to find God than almost everyone else. In the wilderness God is there with us, on the random, directionless paths many may feel they’re walking, God is there beside you. In the wilderness, take time to stop and wait and listen and to seek to discern who it is who walks beside you on the road.