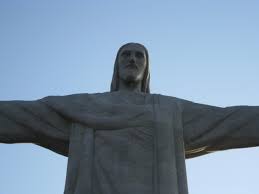 Sermon for 2 before Lent (Epiphany 7)
Year C 2022
Luke 6:27-38
Hyperbole, the refusal to hate, the excercise of faith
(Apologies for having departed from the Church of England readings – my mistake!)

I can remember coming home from day’s out in the Lakedistrict when I was a child, and my dad saying that he was so hungry he could eat a horse between two haystacks. One of my favourites is to say that someone has an ego the size of a small solar system. And recently it’s been raining cats and dogs – hasn’t it?! We all have saying like this – exaggerations, meant to get the point across. In the bible this is known as hyperbole, and it was one of Jesus’ favourite tools for teaching: remember he also talked about taking the plank out of your eye, of a camel going  through the eye of a needle, and even of plucking out your eye or cutting off your hand if they cause you to sin. These are things are not to be taken literally, but that doesn’t mean we shouldn’t take them seriously: Jesus was exaggerating to make a point, and we need to work at today’s gospel passage to work out what should be taken literally and what is there as hyperbole – something to make us sit up and listen, but not to be taken literally.

The Dangers of Taking Hyperbole Literally

Indeed, there are terrible consequences if we take this passage literally. Think of Hitler: his degree of evil stunned everyone as the barbaric truth began to seep out into the open. He exterminated train loads and villages and ghettos at a time. Their possessions were taken to increase the wealth of Nazi party officials: even their bodies were harvested for gold from fillings, and for hair which was used to weave cloth. This happened in a Christian country, where the churches opted not to resist evil. Individuals did (Christians and others) but evil happened because most people chose not to resist evil. “Love your enemies. Do good to those who persecute you. Do not resist that which is evil. If someone strikes you on the right cheek, offer them your left cheek as well.”

Having worked in a women’s refuge, I have also seen the consequences of repeatedly returning to an abusive situation, repeatedly forgiving and not requiring decent treatment yourself – consequences which sometimes lead to serious physical and psycological harm, even death.

These are dangerous words to take literally!

Our Behaviour Towards Those Who Don’t Wish Us Well.

If we look at what Jesus is trying to get across in today’s passage, we can see that it’s on the general theme our behaviour towards those who don’t wish us well – Jesus talks about our enemies, those who curse and abuse us, those whose actions towards us are violent, those who steal from us. Jesus talks about our response in timers of love, prayer and generosity. His hyperbole talks about offering the other cheek to be slapped and giving our coats to those who have stolen our shirts.

At some times in history these things are much more complex than simply individual, personal relationships: at these times there are big questions to be asked about resisting evil. That’s a sermon for another day.  In normal daily life, this is about personal relationships: refusing to write the other person off and trying to see the humanity of those who wish you harm: it is about refusing to descend to the levels of rudeness, violence and bad behaviour which come our way from time to time – we all know about those rifts in family life and friendship which rumble on for years, the original dispute long forgotten. It is about personal dignity and goodness. It isn’t about condoning bad behaviour, and I don’t think it’s to do with allowing bad behavior to go unchecked, or allowing disruptive people to do what they want. It is a refusal to join in with evil. It is about mercy: Be merciful, just as your Father is merciful.

To do this takes much courage and discipline: to pray for those who hurt you – putting them into God’s hands and committing them to God’s care, asking that they will be free from hatred, greed, and violence. I think it must also be about boundaries, about self-mercy: we might say, I refuse to hate you, but I will not allow you to continue to do me harm.

We can’t always say ‘I refuse to hate you’ because hate is sometimes overwhelming, but we can wrestle with ourselves to avoid acting on our hatred, and we can ask God to be healing our hatred, or even to pray that we will get to the point where we will be willing for our hatred to be healed – we can be very reluctant.

A Matter of Faith

In the middle paragraph of today’s reading, Jesus talks about easy relationships: places where friendship is easy and reciprocal, where people flourish in mutuality, where there’s give and take: places where love is easy. The first and third paragraphs are about difficult relationships, about people we dislike or distrust, about selfish, rude and abusive people. These are people who Jesus puts firmly within the scope of our faith; how we respond to them is a matter of our faith. I think Jesus’ hyperbole tells us that this isn’t easy – it’s going to be a struggle – a deep, personal and inward struggle to be a good and godly person in difficult circumstances, to balance a refusal to hate with a belief in your own self worth – mercy to your abuser and mercy to yourself. As we wrestle with these things, we need to talk to God about them, to be prayerfully honest about our struggle. It is the face of such difficult relationships and encounters that our faith counts most: these struggles are painful but they are when our faith is most alive.