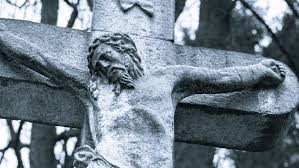 Good Friday 2022
Suffering in Ukraine, Jesus is with us even out our extreme worst,
the roots of violence, perosnal piety and the pain of the world,
the hidden seed of hope.

There have been countless images, in the last few weeks, of terrible suffering. Perhaps foremost amongst them in my mind was a picture of a Ukrainian mother, holding a photograph of her teenage son, who had been shot dead in front of her by Russian soldiers. She had to dig his grave and bury him in the garden of their cottage. A picture of desolation.

Good Friday is all about suffering. It encompasses what human beings are capable of doing to each other: how far we will go to obliterate what we don’t like, or what we cannot face. Sometimes this violence is directed at individual people, sometimes violence spreads and whole peoples, whole religions, whole groups, are destroyed.

The Roman state and the Religious Elite

Jesus was inconvenient to the Roman state, as there were rumours that he was posturing as a King; any hint of insurrection had to be dealt with quickly and harshly. The Romans also needed to keep powerful groups happy, and Jesus was a threat to the religious leaders at the Temple; the suppressed but surfacing realisation that he was the real thing, and that they were, somehow, fakes; his goodness shone an uncomfortable light on their shabbiness. This unholy alliance between powerful state and religious leaders is something see reflected in Russia today.

A careful reading of John’s Gospel suggests that the crowd may well have been incited by the religious elite of his time; who knows what kind of bribery or pressure might have been laid upon them: they found themselves demanding that Jesus should be crucified.

The roots of violence

There are many reasons why people want to obliterate their fellow humans, but perhaps the two I have are near the top of the list: fear of loss of power, and jealousy – knowing that someone has gifts or an authenticity that you don’t have. There are others: fear of difference, the need to assert yourself, self-hatred – just a few of the many.

Jesus, God’s Son, was at the receiving end of all of these seething resentments and petty hatreds. Being truly good, he attracted the worst of it all. He didn’t turn his back on us when we were at our worst: he stuck with us: from those with nails and hammers who were just getting on with their jobs, hardened to suffering, to those who actively manipulated the crowds, those who jeered and spat, those who derided and scorned, those who signed the death warrant on an innocent man, and to the criminals who hung either side of him. Jesus asked his Father’s forgiveness for them all. It seems he had reached the place that many of us have come to over recent weeks – witnessing (and for some, experiencing)  violence which is beyond our ability to forgive: here Jesus shows us to hand it to God, to ask God to do the forgiving.

Jesus’ faithfulness to humanity at its worst

For me, this is at the heart of the Gospel – that Jesus chose to remain with us when we were at our worst. He remained there, the ultimate victim, the scapegoat, the underdog, refusing to turn his back on our inhumanity, until death overwhelmed him.

Personal piety vs the sins of the world

There is a great Good Friday habit of piety – a sort of procession of our petty sins and failings elevated to well above their real status, as we seek forgiveness and salvation – a sort of religious attention seeking. I’m sure this all falls within Christ’s remit, but we also see the bigger picture: that Jesus died at the hands of humans at their very worst – and in this he was faithful. It easy for us to forget the sins of the world when we focus only on our own, personal failings.

At the foot of the cross

Our hearts are stirred by harrowing contemporary images. And they are stirred here too, at the foot of the cross, in the presence of an innocent man, a kind and good man (THE innocent, kind and good man) who suffered. The image of the grieving mother with which we began, is an image of the grief of God – the grieving Father/Mother whose child is dead.

Perhaps that is enough. Today let us stay with today, not seeking the happy ending. But somewhere, deep down in our hearts lies a tiny seed, waiting to spring to life.